Here’s wishing all Hindu readers of Over A Cuppa Tea a very happy and blessed Deepavali. I haven’t been writing for the past few days. While some of you would believe that I’m down with diarrhea again for over eating, unfortunately, I’m not. I was down with high fever instead, so all moods for writing flew out of the window and the mood for sleeping overcomes the will to write.

I’m sure a lot of you know that Deepavali, or Indian New Year is associated with lights, or celebration of lights where people lights up lamps to celebrate the triumph of good over evil. But not many of you know the myth/story behind the festival itself. So, please permit me to retell the story that gives people a reason to celebrate Deepavali. The story of Rama and Sita, or commonly known as Ramayana( The Story of Rama). 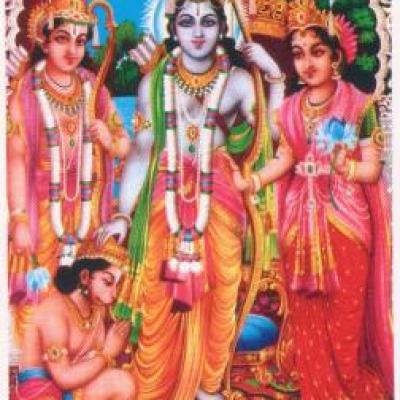 Once upon a time, there live a prince, known as Rama and his wife. The couple were banished from their own kingdom by Rama’s evil stepmother. She was scared that her own son would not succeed the throne, so she sent the bright and wise Rama and his wife, Sita to live in exile. Rama’s brother, Lakshmana was very devoted to his brother, so he decided to leave his young wife at the palace and accompany the couple to live in exile to ensure their safety.

Sita, Rama’s wife is said to be a very beautiful woman, and could charm any man she want with her grace and good looks. Despite of her gifts of good looks, she stays devoted to her husband, even though they’re living in exile, and this irks King Rawana of Ceylon, who have been lusting after the beautiful Sita.

So one day, when Rama and Lakshmana went out hunting and left Sita alone. When Sita is alone, Rawana appears before her as an ailing old man, who begs Sita for help. Sita took pity on the sickly old man, and when she is aiding the old man, the old man changes into Rawana and abducts Sita, telling her that Rama is dead. He rises in the air with her and flies her to his Kingdom.

Jatayu, King of the Birds, also commonly known as Garuda (Phoenix), witnessed Rawana carrying off Sita and they battle in the air. Rawana delivers a fatal wound to Jatayu’s wings who fell to the ground, where he is later discovered by Rama and Laksmana. Jatayu was near death and managed to tell Rama that Sita was abducted by the evil king.

Rama and Laksmana travelled far and wide and enlist the aid of the army of Wanaras, a race of giant monkeys. Sugriwa, King of the Wanaras, agrees to help Rama rescue Sita in return for Rama’s support of Sugriwa’s attempt to regain his rightful throne in the land of Guakiskenda.

When Sugriwa meets his arch-nemesis, Subali, Rama saves Sugriwa’s life with a magic arrow which kills Subali. After Sugriwa is crowned King of Guakiskenda, the white monkey general, Hanuman, is sent to Alengka (Ceylon) to scout the defenses and to deliver Rama’s ring to Sita, so that she would know that Rama was alive and soon will rescue her.

After a narrow escape from the stomach of Wikateksi, the enormous sea monster which guarded the approaches to Alengka, Hanuman kills Wikateksi and flies to the capital of Alengka, the kingdom of the giants. Fortunately, there are many monkeys living among the giants, which provide cover for Hanuman, who reduces his size. He looks everywhere in the city for the abducted Sita. Eventually Hanuman finds Rawana’s palace and the women’s quarters. Hanuman meets Sita in the garden and gives her Rama’s ring, which she recognizes at once, and tells her that Rama is on his way to rescue her.

Hanuman, in order to test the strength of the city, resumes his normal size, climbs to the top of a tall building and hurls a challenge to the awestruck crowd below. He begins to destroy the buildings around him by using an uprooted palm tree as a club. He is felled by an arrow shot by the crown prince of Alengka, Hindrajit. Hanuman is shackled in chains and sentenced to die by slow fire.

Hanuman appeals to Agni, the god of fire, to save him. A wall of flame springs up between Hanuman and the watching crowd. With a burst of strength, Hanuman breaks his bonds, and swinging a glowing torch picked up from the fire, goes on a rampage which ends in the burning of a large part of the city. Assuring himself that Sita’s pavilion is safe, Hanuman leaps into the air and flies back to Guakiskenda.

After hearing of Hanuman’s exploits, Rama adopts him as his own son. The army then heads for Alengka, which they find surrounded by a boiling sea. By hurling huge boulders into the sea, the monkey soldiers build a causeway to the island. Rawana learns of the invasion and assembles his generals. Some of the generals resent Rawana’s evil rule, but heretofore have lacked the courage to oppose him. Wibisana, Rawana’s brother, as spokesman, points out that it was because Rawana abducted Sita that Alengka is now in danger.

He suggests that Rawana release Sita and avoid bloodshed and loss of life and property. Angered, Rawana strikes Wibisana, who then deserts to Rama’s army. Rawana is tempted to murder Sita, but is thwarted by Trijata, Wibisana’s beautiful daughter, who has grown to love Sita as a sister. Rawana turns to another brother, the giant Kumbakarna, who although disapproving of Rawana’s crimes and baseness, decides to help because they are of the same blood.

After many guerilla attacks by the monkey soldiers, the two armies finally face each other. Two opposing generals, Kumbakarna and Laksmana challenge each other. Kumbakarna is killed by Laksmana’s magic arrow. Other duels take place on the battlefield. Rama spots Rawana and pursues him, shooting showers of arrows, which seem to have no effect on Rawana other than to make him back off. Rawana backs in between two unusually formed rocks which snap together and hold him in an inescapable grip. These rocks are inhabited by the souls of two of his daughters, who Rawana had murdered, and who are at last able to avenge themselves on their father.

Rawana’s army surrenders and Rama gives the throne of Alengka to Wibisana. Rama and Sita are joyfully united. The fourteen years of exile being over, Rama, Sita and Laksmana return to Kosala, where they are welcomed by all. However, rumors circulate about Sita’s virtue. She offers to test her virtue by fire. She enters the ring of fire and emerges unharmed, her faithfulness was confirmed. When the rumors persist, she leaves the palace for the spiritual life.

The Ramayana story is especially important to Hindus because it is possible for ordinary people to identify with the characters and situations. The heroes and heroines are emulated for their positive qualities of honesty, devotion, perseverance, fidelity, and bravery. Strongly evident in this story is the portrayal of pure evil and those who have the courage to resist and overcome that evil.

And so, that is why people started to celebrate Deepavali. The Hindus lights up oil lamp to celebrate and commemorate the triumph of good over evil.

Cleffairy: A special thanks to a good friend of mine who shared Rama’s story with me and assist me in the whole process of the retelling of Rama’s story. I couldn’t have done it without her. Happy Deepavali and happy holiday, everyone. I enjoyed the story very much, but I have to say, Sita does reminds me of Helen of Troy. I guess, in any culture, there will always be a story that resembles Helen of Troy. Sometimes, beauty has always been the reason of war between countries and men. Are women evil beings that provokes war and fightings? Or women are just mere excuse for men to show their aggressive nature? A penny for your thoughts.

This policy is legal and valid from 15 June 2010 This blog is a personal blog written and edited by me. For questions about this blog, please contact [email protected] This blog accepts forms of cash advertising, sponsorship, paid insertions or other forms of compensation. This blog abides by word of mouth marketing standards. We believe in honesty of relationship, opinion and identity. The compensation received may influence the advertising content, topics or posts made in this blog. That content, advertising space or post will be clearly identified as paid or sponsored content. The owner(s) of this blog is compensated to provide opinion on products, services, websites and various other topics. Even though the owner(s) of this blog receives compensation for our posts or advertisements, we always give our honest opinions, findings, beliefs, or experiences on those topics or products. The views and opinions expressed on this blog are purely the bloggers' own. Any product claim, statistic, quote or other representation about a product or service should be verified with the manufacturer, provider or party in question. This blog does not contain any content which might present a conflict of interest.
Loading Comments...