How was your Merdeka weekend, folks? Did you have fun? I sure did! 😀 Instead of rotting at home again this year like I usually do during the yesteryears, I decided to do something different and memorable instead this year. First I went to KLCC to window shop with my friends, and having heard about MaTiC recently, I decided to check it out with some of my blogger friends, considering that we recently discovered that MaTiC have been hosting plenty of fun event where you can have quality time with your family and friends. 😀

Nightfall in MaTiC. Beautiful, isn’t it?

KLCC is just a stone-throw away from MaTiC, so if you happened to go shopping in KLCCÂ  on Saturdays, do make sure to drop by MaTiC for their 1Malaysia KL Family Fair. There’s varieties of items on sale and these include handicrafts, garments and apparels, accessories, food and beverages, car boot sale, free training of â€œCuti-cuti 1Malaysiaâ€ dance and many more.

Apparently the 1Malaysia KL Family fair has been ongoing for two years every Saturday from 4pm to 12 am and I was absolutely in the dark about it. 🙁 I can’t imagine how much fun I’ve been missing all these while! What a shame!

My son spotted a classic bull-cart on display that night and wanted to have a go on it. Too bad it’s stationary. It would have been fun if it was real and up for hire. 😛

There were so many activities going on the whole day for the whole family in conjunction with Merdeka day in MaTiC. The memorable day started off with the Merdeka Hunt for adults and colouring contest for the children in the morning. I missed those activities though, cuz I was busy window shopping with my friend in KLCC earlier.

I dropped by in the evening for the 1Malaysia KL Family Fair Merdeka Celebration at MaTiC together with a few blogger friends just before the cultural dance performance and singing contest started, though. 😀

It was a rainy night, but these clowns still clowned around to entertain the visitors. Awesome, right? The rain did not dampen their spirit! Kudos to the cheerful clowns! 😀

I noticed that there’s a small scale bazaar selling loads of crafts and merchandises, but since it started to rain when I was there, I did not manage to check it out. Trust me not to bring along an umbrella when I was there. 🙁 I could have probably have a blast shopping over here. Oh well, I wasn’t really happy that I did not get to splurge over here, but my husband was probably snickering cuz he doesn’t have to spend on me.

I quickly made my way to the open stage area, where plenty of visitors were already there, waiting patiently for the cultural performance to start. There was havoc for a little while, visitors calling for the parasol and stuff when it started to rain, but I’m glad to report that the MaTiC staff and participating stalls handled it quite well.:D

I was feeling rather famish, so while waiting for the huge parasols to be set up, I went for a food hunt, looking for something to eat. The first thing I spotted was the skewered steamboat stall.

Locally known as Lok-Lok, the steamboat- like dish consists of different assortment of raw seafood, meat and vegetables all served on satay sticks that you dunk in a boiling pot of thick aromatic satay sauce to cook before enjoying. However, there was no boiling pot of satay sauce to cook our skewered goods in but rather just a pot of boiling water. Satay sauce was drizzled on separately over here in MaTiC food bazaar.

I bought some fried skewered goods, but my son gobbled them up before I could take a picture of them. 😛

There was also burger stall

And Yong Tau Foo stall. For those who are not familiar with this dish, it’s essentially a clear consommÃ© soup containing a varied selection of food items, including fish balls, crab sticks, bittergourds, cuttlefish, lettuce, ladies fingers, as well as chilis, and various forms of fresh produce, seafood and meats common in Chinese cuisine. Some of these items, such as bittergourd and chili, are usually filled with fish paste. The foods are then sliced into bite-size pieces, cooked briefly in boiling broth and then served either in the broth as soup or with the broth in a separate bowl. The dish is eaten with chopsticks and a soup spoon and can be eaten by itself or with any choice of egg or rice noodles, or bee hoon.

But I just had these a few days ago before, so I gave it a miss.

I wanted something heavier and more filling since I was completely famished from my walks in KLCC earlier, so I went and check out the Char Koay Teow stall instead. Note the price? The pricing is completely reasonable though MaTiC is generally aimed for tourists. So it’s safe to say that the 1Malaysia KL Family Fair is not a tourist trap. 😀

I spied the Char Koay Teow ingredients. Looking good. 😀 Most of the ingredients are fresh.

When I was about to make my order, I spotted the man who manned the stall cooking some fried rice upon request, so I played paparazzi a little bit and took a video of him cooking fried rice. 😀 Nice to note that most of the stall here are eager to accommodate your requests though it’s not on the menu.

Video: Fried rice in the making

After making order for the Char Koay Teow, the smell of satay beckons me from afar, and I was there in a jiffy, that goes without saying 😀

Man BBQ-ing satay over the grill

Satay being grilled…looks so tempting, aren’t they?

Plenty of fresh local fruits in the fruit stall.

And again, I played paparazzi when I spotted some tourists buying some tropical fruit juice from the stall.

Anxious to enjoy the cultural performance that night, my blogger friends and I just grabbed these to enjoy while waiting for the performance to start.

Keropok lekor is a traditional fish snack for the Malay people in Terengganu, Malaysia. It is usually made by grinding fish or vegetables into a paste, mixing with sago and then deep-frying it. It comes in three main forms: lekor which is long and chewy, losong (steamed) and keping which is thin and crispy. It is frequently served with dipping sauces

I like mine crispy, so I ate these more than the thick ones.

Mee Bandung. This is a traditional cuisine originated from Muar, Johor, Malaysia. The word ‘bandung’ in its name is due to literal definition which means “mixed” or “pairs” in Malay language as in several Malay words like “Sirap Bandung” (rose syrup beverage mixed with condensed milk) In the Mee Bandung case, it is a cuisine originally consisted of only noodles and eggs besides of its soup made of the mixture of chilli, onion, spices, shrimp paste and dried shrimp. Later, the Mee Bandung recipe had been improved with the addition of shrimps, meat, fish cakes and vegetables.

And of course, everyone’s favourite satay. 😀 Satay can be found throughout all the states of Malaysia in restaurants and on the street, with hawkers selling satay in food courts andnight. Popular kinds of satay are usually beef and chicken satays. It’s usually served with nasi himpit, sliced onions and cucumber along with sweet and spicy peanuts sauce.

We were happily stuffing our faces when the special cultural dance performance to commemorate the nation’s 56th Independence Day started.

My pictures of the performance came out quite blurry, but I managed to record some decent videos for it. 😀 Check it out.

Apart from the cultural performance, there was also a singing contest that night. Here’s a video of one contestant singing a patriotic song that night.

Neway, you guys really should check MaTiC out if you haven’t. 1Malaysia KL Family Fair is held every Saturday from 4pm to 12 am.Â  Check out their websites for other event schedules and stuff. Like I said in my previous post on MaTiC, there’s plenty of interesting events in MaTiC every month, not just the 1Malaysia KL Family Fair. So yes, do check them out.Â  😀 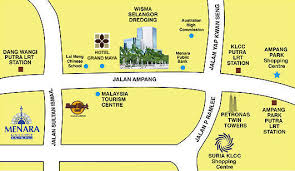 Hereâ€™s the map and address to MaTiC: