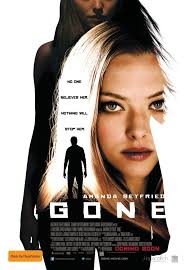 Remember Amanda Seyfried? You know, the girl who was boosted to fame with ‘Mamma Mia’ the movie as well as ‘Letters to Juliet’ a few years back? Well, this time around, Amanda Seyfield is no longer playing the innocent, naive girl who is smitten with her boyfriend and can’t wait to be married.

In the movie ‘GONE’, she played a role of a determined young woman known as Jill.When her sister disappeared, Jill is convinced that the serial killer who kidnapped her two years ago has returned, and she sets out to once again face her abductor.

Jill was forced to face her greatest fear in order to get her sister back. In this movie, she faced a lot of hurdle and challenges, including which she was accused of being a paranoid and delusional when she told the authorities that her sister has been abducted.

While I was annoyed that Jill was placed in predicament where she’s all alone and gets no help from anybody in the movie, I have to say that it’s quite refreshing to see Amanda Seyfried playing a rather heroic and courageous role instead of playing a sweet-natured, hopelessly romantic young woman in dilemma.

Below is the trailer for ‘GONE’. Watch it and you’ll know what I mean.

‘GONE’ is rated PG-13 for violence and will be shown in Malaysian cinema nationwide on 10 May 2012. If you’re into a crime thriller, this movie will be perfect for you.