There has been so many unfortunate events and death this year. MJ, Farah Fawcett and our very own local Yasmin Ahmad. All of the deaths makes me realize that Death with be delivered to your doorsteps and you will die without fail if you are meant to die. It does not matter if you’re young or old-when it’s time for you to go, you’ll go. I suppose, what matters most is living your life to the fullest, making your own history and legacy so that you will not be forgotten when you die.

Same goes with Yasmin Ahmad. Forgive me for the awkward timing of this article, but it bothers me that I did not write anything at all about the woman who tries to deliver the concept of One Malaysia even before PM Datuk Seri Najib Tun Razak even started to promote it when she was alive.

She was known as Yasmin Ahmad. A woman known by Malaysians through her unity films as well as catchy Petronas ads. We knows so little about her. We only know her as a successful filmmaker who captured the hearts of many. We all know about her life as an adult. But we know nothing about her when she was a mere child.

Let me ask you this question. How many out there knows that Yasmin Ahmad was actually a hermaphrodite, and in her earlier years, she was known as a man who goes around with the name Zulkifley Ahmad? I guess not much knows about it. Even I did not know about it until I read an article and many outrageous comments in Marina Mahathir’s blog.

It seems that a Malaysian tabloid, KOSMO! had somehow published a degrading article about Yasmin Ahmad being a hermaphrodite or rather, a trans-gender, causing emotional scar to the late Yasmin Ahmad’s family and uproar in the cyberspace among her fans and fiend alike. She was barely buried, but many are arguing on whether her choice of choosing to be a woman after some time is correct or not.

All right, before any of you slammed me for anything, let me stress out something here:

Historically, the term hermaphrodite has also been used to describe ambiguous genitalia and gonadal mosaicism in individuals of gonochoristic species, especially human beings. The term comes from the name of the minor Greek god Hermaphroditus, son of Hermes and Aphrodite. In a biological context, a hermaphrodite is an organism that has both male and female reproductive organs.

Let’s just say that sometimes, during a pregnancy, something goes wrong, and you get a child who is born with box sex intact. So in other words, rare as it is, it is a natural biological occurrence. Hermaphrodites are just people who are born with both sex.

Recently, intersex has been used and preferred by many such individuals, encouraging medical professionals to use the term. However, in Malaysia and many other countries in the world, not many understood that being a hermaphrodite means that someone is just having a rare biological condition. Many thought that hermaphrodites are screwed up people who chooses to change their gender just because they are uncomfortable being a man or a woman.

Same goes with the recently deceased Yasmin Ahmad. She was born a hermaphrodite. It was a condition not of her own choosing and yet many condemned her for choosing to be a woman after leading her life as a man earlier on. She was first known as Zulkiflee Ahmad, the first runner up in a singing contest back in the 70s for Bintang RTM, if I’m not mistaken. After considering her options and referring her conditions to the Islamic Council, she decides to be a woman. So now, she is Yasmin Ahmad. She was no longer Zulkiflee Ahmad. Even her identity card stated that she was a woman. Her burial rites (talqin) also stated her as a woman.

It is known that people with intersex conditions sometimes choose to live exclusively as one sex or the other, using clothing, social cues, genital surgery, and hormone replacement therapy to blend into the sex they identify with more closely. Some people who are intersexed, such as some of those with Klinefelter’s syndrome and androgen insensitivity syndrome, outwardly appear completely female or male already, without realizing they are intersexed. Other kinds of intersex conditions are identified immediately at birth because those with the condition have a sexual organ larger than a clitoris and smaller than a penis. Intersexuality is thought by some to be caused by unusual sex hormones; the unusual hormones may be caused by an atypical set of sex chromosomes.

So why the bloody uproar accusing the late Yasmin Ahmad for being a a screwed up transexual who went against the Islamic teaching and puts her family in emotional distress even when she was barely buried? She gave birth to a child, remember? That alone should qualify her as a woman, and people should not condemn her decision to live as a woman when her body functioned like a woman more than a man. I am sure many extremists and racists are upset with her films, ads and works she produced when she was alive, but to humiliate the dead and the family the way they did, was just low.

For those who are curios, below is a picture of Yasmin Ahmad as Zulkifley Ahmad

Yasmin Ahmad and her reflection

Yasmin Ahmad and her husband 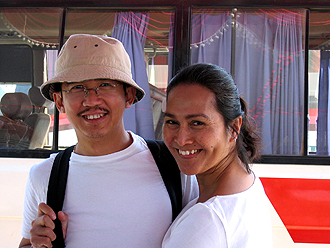 Gender does not matter to me. Besides, as far as I’m concern, Yasmin Ahmad did seek Islamic Council’s view in order to determine her current sex before she passed on. Her gender should not be made an issue. What matter most is her contributions to nurture Malaysian’s mindset and promote not only good moral values, but also racial peace and harmony in the country. I’m sure if she’s still alive and asked to comment on those articles degrading her, I’m sure this is what she’ll say ” This is not something I am embarrassed about, but it is also something that I don’t go around telling people.”

Below are some of her work. Dare you tell that the ads are blasphemy?

Cleffairy: A lot of Malaysians are behaving like sexually unsatisfied housewife, who have nothing better to do than spread gossip and badmouth others. They should look at themselves. They are not perfect being either.

This policy is legal and valid from 15 June 2010 This blog is a personal blog written and edited by me. For questions about this blog, please contact [email protected] This blog accepts forms of cash advertising, sponsorship, paid insertions or other forms of compensation. This blog abides by word of mouth marketing standards. We believe in honesty of relationship, opinion and identity. The compensation received may influence the advertising content, topics or posts made in this blog. That content, advertising space or post will be clearly identified as paid or sponsored content. The owner(s) of this blog is compensated to provide opinion on products, services, websites and various other topics. Even though the owner(s) of this blog receives compensation for our posts or advertisements, we always give our honest opinions, findings, beliefs, or experiences on those topics or products. The views and opinions expressed on this blog are purely the bloggers' own. Any product claim, statistic, quote or other representation about a product or service should be verified with the manufacturer, provider or party in question. This blog does not contain any content which might present a conflict of interest.
Loading Comments...